Now for something completely different... We are in the process of moving back to Hawaii, so I don’t have the time to continue on the series about Wagner’s influence right now. Instead, you will find below something I put together several years ago showing the parallels between the lives of Richard Wagner and the “gonzo” writer Hunter S. Thompson. Though I don’t believe in reincarnation as Wagner did, so striking are the similarities between the men that I like to imagine that Wagner came back as Thompson, and boy was he pissed.1

I first noticed their parallels as artists and men when I read Thompson and Wagner’s letters around the same time about ten years ago. They were both fixated on the same issues, and in the same general way. This spurred me on to read more about Thompson—as well as Wagner of course—and these similarities became even more striking. I wrote the chart below to briefly encapsulate some of this. I didn’t know how to get it to format on the blog, so I just am publishing screen shots of a document—sorry it's a bit blurry. Peruse the chart this week; I am going to save until the next post the narrative about it, and why I think it is not just interesting but also important.

The colors in the chart are their individual variations; everything else is the same. 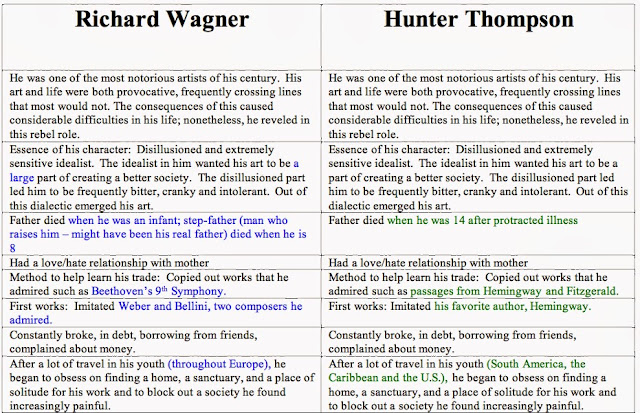 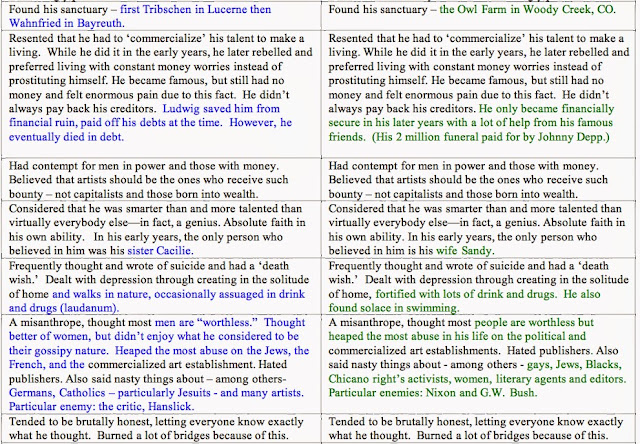 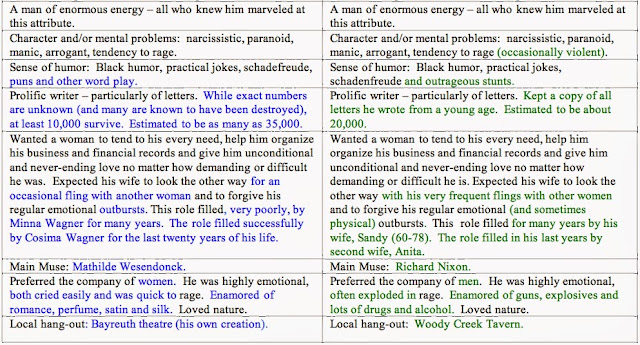 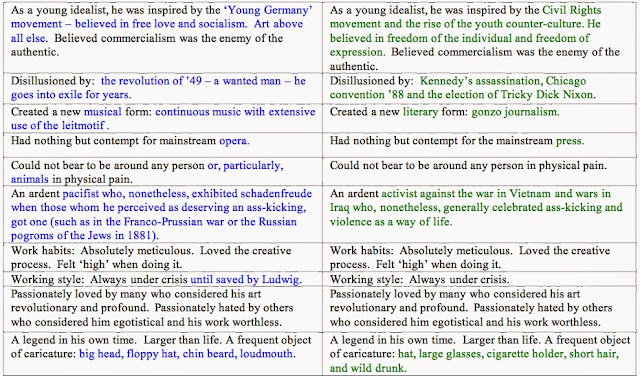 1 I will probably not ever write about Wagner’s religious or philosophical beliefs in any depth, but he was very attracted intellectually to Buddhism, which aligns closely with the beliefs of his greatest influence, the philosopher Arthur Schopenhauer. That said, he also was greatly attracted to the symbols, though not dogma, of Christianity. He had planned a explicit Buddhist-themed opera, The Victors, but he ran out of steam, plus he decided Parsifal covered the ground adequately. An interesting book that covers Wagner’s Buddhist (and Christian) beliefs is The Redeemer Reborn, Parsifal as the Fifth Opera of Wagner’s Ring, by Paul Schofield (a former Zen monk). He makes the case that all the major characters in the Ring are reincarnated in Parsifal to work through their remaining negative karma. It’s really well written and a rather fascinating take on the opera.