Joyce’s familiarity with Wagner—the man as well as his works—is apparent from the numerous references to the composer in his books, in particular Ulysses and Finnegans Wake. Here, for example, is a passage from the Wake, in which the artistic twin, Shem (“Shem the penman,” who can be seen as an alter-ego for Joyce himself), is described in Wagnerian terms:

The “heldin” (heroine, in German) who is enjoyed at “Boyrut” (Bayreuth) is no doubt Isolde, given the subsequent text. “[O]ttorly admired by her husband” is a reference to Otto Wesendonck, who provided Wagner (“wagoner”) with financial support. Otto was married to “mudheeldy (Mathilde) wheesindonk,” the unrequited love for whom is thought to have been Wagner’s inspiration for Tristan und Isolde. Isolde’s relationship with Tristan (“trist in”) is described as “tourments of tosend years.”2

Wagner’s Siegfried—who forges his father’s sword anew and with it not only slays a dragon, but shatters Wotan’s spear, portending the end of the era of the gods—was closely associated with the “artist-hero” in the late nineteenth century. 3 As George Bernard Shaw puts it, Siegfried “sets to at the bellows with the shouting exultation of the antichrist who destroys only to clear ground for creation.”4 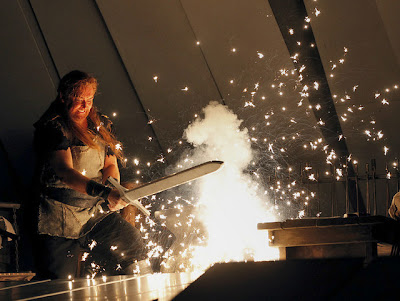 The artist-hero Stephen Dedalus owes much to the character of Siegfried, and references to smiths, forges and swords abound in both Portrait and Ulysses. Near the end of Portrait, for example, as he begins to realize the life he was meant for, Stephen wonders if he has seen “a prophecy of the end he had been born to serve...a symbol of the artist forging anew in his workshop out of the sluggish matter of the earth a new soaring impalpable imperishable being?”5

Similarly, in Ulysses, he calls his ashplant (an Irish walking stick) his “sword” several times, and in the “Circe” episode, in a direct reference to smashing of Mime’s anvil in Siegfried, Stephen “lifts his ashplant high with both hands and smashes the chandelier,” crying out “Nothung!”6

As explained by Timothy Martin in Joyce and Wagner,

The idea that Siegfried served Joyce as a prototype for Stephen Dedalus has been widely acknowledged.... In identifying Stephen with Siegfried and in linking him with this culturally defined artistic heroism, Joyce was not only asserting the heroic nature of the artist. He was also invoking Wagner’s theories of art.... The penultimate entry in the journal at the end of A Portrait constitutes a declaration of Stephen’s intentions as an artist: “Welcome, O life! I go to encounter for the millionth time the reality of experience and to forge in the smithy of my soul the uncreated conscience of my race” [cite]. In this passage the metaphors of forge and smithy and the bold spirit of confrontation are appropriate to Siegfried, while the theory of art that Stephen’s resolution embodies—the embracing of idealized “life” as the material of art, the emphasis on the artist’s individual “soul,” the notion of a “public conscience,” and the communal function of art—is...thoroughly Wagnerian.7

The historical cycle at the heart of the Ring—the downfall of the gods and dawn of the era of humanity, as well as the end returning to the beginning in the waters of the Rhine—must have also greatly appealed to Joyce, who was obsessed with the Renaissance philosopher Giambattista Vico and his cyclical theory of history. Vico’s cycle consists of four recurring phases: (1) the Theocratic or Divine Age of Gods; (2) the Aristocratic or Heroic Age; (3) the Democratic Age; and (4) a short period of chaos, caused by the collapse of democratic society, which is inherently corrupt. Out of this chaos a new cycle in initiated by the ricorso, or “return,” to the Theocratic Age. (See here.) 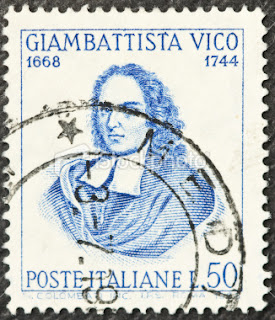 Joyce’s interest in the cycles of history—which fully flowered in Finnegans Wake—is also apparent in his earlier works, for instance in the “Proteus” episode of Ulysses, when Stephen ponders the the human lifecycle: “Bridebed, childbed, bed of death, ghostcandled”8; and the fate of a drowned man: “God becomes man becomes fish becomes barnacle goose becomes featherbed mountain.”9

As noted by Timothy Martin,

In the Ring the healthy—and thoroughly natural—impulses of a liberated Humanity, “doing exactly what it likes, and producing order instead of confusion thereby because it likes to do what is necessary for the good of the race,” replace law, coercion, and the rule of God. The progress from divine to heroic—and perhaps, with Siegfried’s death, to human—follows the Vichian [i.e., in the style of Vico] pattern very closely.10

Finnegans Wake has a four-part Vichian structure, and consists of a never-ending story, the last sentence running into the first sentence, so that one could pick up the book anywhere. And like the Ring, which ends where it started with the Rhine gold once more in its proper place in the river and the Rhine-daughters gamboling as they ever were, the Wake’s beginning and end takes place in the Liffey, whose waters are one and the same as Anna Livia Plurabelle, the female lifeforce:

riverrun, past Eve and Adam’s, from swerve of shore to bend of bay, brings us by commodius vicus of recirculation [note the reference to Vico] back to Howth Castle and environs. [beginning of book]

And of course the book’s title—which can be read as a subject and verb (there’s no apostrophe)—is itself a reference to the cycle of man, “acknowledg[ing] death but promis[ing] resurrection.”11
It’s hard not to make comparisons between the Ring and the Wake:

Both are mammoth four-part works, the Ring three dramas with a shorter prelude, the Wake three long books and a brief one; both, like the myths on which they draw, explain creation, dissolution, and the end of the world through tales of gods, heroes, and men; both express sympathy for a “human, erring and condonable” [cite omitted] Allfather. The near-continuous presence of the Ring in Joyce’s “great myth of everyday life” and the near-perfect consonance of the Wagnerian theme of sin and redemption in Joyce’s mythic score suggest that Finnegans Wake was shaped from its inception, both structurally and conceptually, by Joyce’s lifelong experience of Wagner and the Ring. Wagner’s Ring deserves a place among the “structural books” at Finnegans Wake.12

Thematically, however, I’d say that Tristan and Isolde was more of an influence on the Wake than was the Ring. References to Tristan abound in the book, occurring every few pages. Here’s one I think is particularly fun:

Sure he hasn’t got much of a bark

And sure any he has it’s all beside the mark...

Without ever winking the tail of a feather. 14

According to Joyce and Wagner scholar Timothy Martin, the primary characters of the Wake all have parallels to Tristan: HCE is King Marke; his marriage to the younger ALP and his attraction to his daughter Issy are analogous to Marke’s marriage to Isolde; the twins Shem and Shaun together make up Tristan, and their assault on authority in the person of their father parallels Tristan’s betrayal of his uncle.15 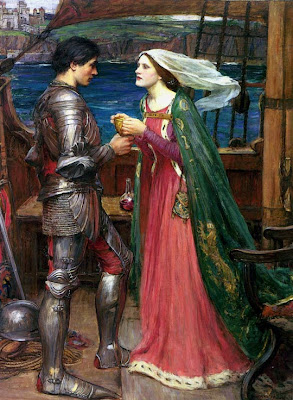 Martin discussed the thematic parallels between Tristan and the Wake in his book:

For Joyce Tristan provided perhaps the most powerful artistic expression of the regressive longing for unconsciousness and escape from temporality that the Wake embodies. If...Joyce’s main intention in the Wake was to represent the world of darkness and of sleep, then Tristan must be counted as the book’s most important operatic influence.... In imagery of light and darkness Tristan and the Wake assert that there is an alternative or even a higher reality in unconsciousness: in day are deceit and pain, in night truth and comfort.16

This is obviously only a tiny glance at Wagner’s influence on Joyce. For those who want to learn more, I strongly recommend Timothy Martin’s book, Joyce and Wagner. An added treat for true die-hards is that it includes an index of Wagnerian references in all of Joyce’s works.

A final note: After proof-reading/editing this for me, Robin commented that Joyce’s language doesn’t seem at all Wagnerian to her—i.e., that Joyce appears to be all intellect, whereas Wagner is all about emotion—and so she wonders what Wagner could have meant to Joyce.

I don’t have a brilliant answer to this question. I do think that although Finnegans Wake seems to be way over on the intellectual/wordplay side of the spectrum, Ulysses is full of emotion—though the emotion is not always easily accessible in the way that Wagner’s emotionally-charged music is. One has to work at it. So I have to agree that Joyce and Wagner do seem to be a bit the odd couple in this regard.

Any thoughts about this out there?