I first conceived this blog on my original car trip to Seattle in 2001 to see the Ring, as I wrote about in my introduction here. This is the final year for this particular production, thus I came to see it for the last time while completing a personal cycle (culminating in the creation of this blog) on this year of Wagner's bicentennial.

This is my third viewing of the Seattle production, plus I have been to four others nationally – two in New York, one in San Francisco and one in Los Angeles. That might seem like a lot, but it barely counts among Wagnerians, for whom traveling to Ring cycles is de rigueur. Here is a picture Leslie took Tuesday of me with Verna, who is a fellow member of The Wagner Society of Northern California (WSNC).  This is her 67th Ring!

Wagnerians are analogous to Deadheads in their enthusiasm for traveling around the country, and world, to see performances.  But Wagnerians have been doing it steadily since 1876, so we really are the original “trippers.”  There are some links between the two sets of travelers, in fact. Within the WSNC, there have been a number of Deadheads who felt there was a similarity between the experiences of both, as Pamela Potter wrote in the quarterly journal Leitmotive:

Wagner and the Grateful Dead demanded the very same attributes from their devotees: a tolerance for very long sequences with very little action, and the understanding that one doesn’t necessarily “get it” on the first encounter, but has to be willing to subject oneself to repeated experiences before fully appreciating the phenomenon.1

One Wagnerian was Grateful Dead member Phil Lesh—also a one-time member of the WSNC—who convinced the Dead to cancel two concerts so they all could go to a San Francisco production of the Ring in 1988 (My friend Ian, who had tickets to that show, said it totally bummed him out when they cancelled). Jerry Garcia saw three of them, but according to Lesh, “In the end Jerry didn't make it back for the final opera of the cycle, having made previous plans to take his daughter Annabelle to see Phil Collins at the Oakland Coliseum. ‘What?’ I asked when he told me. ‘You're going to pass up Twilight of the Gods for Phil Collins?’; ‘If it was just me - but I promised Annabelle.’”2

For those who are reading this who don’t know much about the Ring cycle, it consists of four operas in which the power of love is juxtaposed against the love of power, greed and dominance. The love of power tragically gains the upper hand, leading to the downfall of the Gods and society as a whole. However, the heroine Brünnhilde renounces power and embraces love though a self-sacrificing action that leads to a new beginning for the world. Oh yeah, and there is a ring involved.

The absolutely best way to learn about the Ring while also being greatly entertained (via one of the best comic monologues in history) is to watch Anna Russell. This is the first of three parts; if you haven’t seen it, try this nine minutes. I am sure you will want to go on and watch the other parts once you have seen this much:


Originally—ten years ago—Leslie and I had planned to try to get tickets to the Wagnerian mecca, the Bayreuth Festspielhaus in Germany, for their annual festival on this bicentennial year.  But then I decided another trip to Seattle was the better plan. Given the recent uproar—mostly a whole lot of booing—about the new production of the Ring coming out of Bayreuth, I think I made the right choice.

Simply put, the Seattle Opera is the best place to watch Wagner operas in the United States, and probably the world. This is no accident. Wagner’s music is ingrained in the opera company's history, part of their explicit mission, and the musical passion of their founding director, Glyn Ross, and their second and current general director, Speight Jenkins.

As a young opera company in 1975, Ross decided to do a very audacious thing, which was to stage the Ring cycle. At that point in the American opera history, there had not been a Ring festival—showing all four operas in the same week— since 1939. Part of the reason was the massive expense to put on the cycle; it had only been done by the major American houses before: Chicago, New York and San Francisco. For a small, very new house—it had been founded in 1963—this was just unprecedented. While some critics grumbled about the production, it was popular. Here (with a excerpt below) the company tells the story of what happened after the initial Ring cycle at Seattle:

That year was so successful that Ross convinced the Seattle Opera Board that the Ring should be repeated, and the audiences and press came from even farther away. Soon the annual summer cycles of the Ring (one in German, one in English) became a tradition and were repeated every year.  The repetition established Seattle Opera worldwide as a Ring center; it did more: it inculcated into the Seattle opera public a liking for Wagner’s works and a familiarity with them that is probably still greater per capita than in any city outside Germany.

The Seattle Opera team agrees with my general view of Wagner, which is that whatever his individual sins and peccadilloes, he composed operas of amazing depth, beauty and humanity, and therefore, productions should reflect these qualities. Wagner constructed his operas in order for the listener to be “knowers through feeling.” That is, he didn’t want the audience to intellectualize the experience but to surrender to the drama, the music. And, indeed, that is exactly when Wagner is at his most profound: when a listener can quiet a thinking brain and, instead, just be in the emotional moment. Therefore, I seek to attend Wagner performances that enhance the ability to do this. This is what Seattle Opera excels at.

In the rest of the world this is decidedly not the trend. Instead, directors impose their vision—and weird visions they frequently are—to trump, circumscribe and comment on Wagner’s works and life. These directors want you to think, and think critically, while listening. I am happy to think about Wagner’s music dramas—and his life—anytime other than when listening. When I listen, with headphones on at home or in a seat in a theater, I just want to feel. In Europe, and increasingly in America, what many call "Eurotrash"—closely linked to what is called regietheater—has conquered.3  Even Bayreuth has completely succumbed; Alex Ross, in the most recent New Yorker, describes the new Ring production that generated what is being termed the “boo-vation” as “a sprawling act of operatic Dadaism that falls between Buñuel and South Park.” Yep, that sounds like now-classic Eurotrash.

Here is a photo from the Bayreuth Siegfried set that give you a little flavor of Eurotrash: 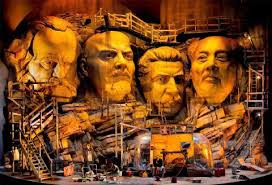 In contrast, here is the set for the same scene from the Seattle Opera, which is set in a forest as it was in the original production. 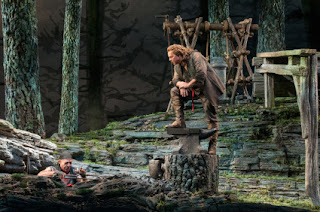 Speight Jenkins, who was an opera journalist before his 25-year stint as general director, has turned Seattle into one of the premier opera companies of America, and the envy of other opera houses. The city of Seattle has the highest per capita attendance of any opera house in America, and the opera house draws its audience from every state and many countries (people came from 22 different countries for this Ring cycle). Part of the reason, of course, is certainly their thoughtful, intelligent and emotional productions. But they have other draws, too. They are a very intimate company; they try to make their patrons feel like part of a big family. Speight greets you personally as you enter the opera house for both the lectures and the operas.
At the end of each opera, he comes on stage and will answer any question that comes his way. He is the model for all the rest of the company, as every staff member I have ever interacted with over the years has been wonderful. Hell, I ended up with a personal relationship with the woman who called seeking donations from Seattle.  She—sadly—no longer works for the opera, but I used to look forward to my yearly calls from Myrna Mishmash—what a great name, right?—to catch up on life at Seattle Opera. Clearly, an opera company is doing something right if you look forward to their fund-raisers calling you.

The real thing that puts Seattle Opera above all other companies is their commitment to education, both for children and for adults. While most companies have an education component to try to introduce opera to those who are new to it, Seattle’s outreach is just spectacular in terms of quantity and, most particularly, quality. I come here as much for their lecture series as for the operas themselves, which is saying quite a lot. I will write about that more next week.

A little tidbit: the staff gets a paid holiday to celebrate Wagner’s birthday.

So far, we have watched Rheingold and Walküre and await the next two operas.  Here are two pictures from the Seattle Opera this week:

3. I don’t want to go into the horrors of Eurotrash here, but this blogger is the one to read if you want to read more about it. He hates it!