This is the first in a series of posts regarding the vast influence Richard Wagner has had on the arts—as well as other aspects of modern culture. Robin asked me to contribute the two about James Joyce, since I’m a great fan of the Irish writer, and am part of a Finnegans Wake reading group that meets twice-monthly at a local Irish pub to sip Guinness and ponder Joyce’s encyclopedic romp through the history of everything.

Reading the Wake, it becomes clear from the very first page (“Sir Tristram, violer d’amores, fr’over the short sea”) that Joyce draws heavily from Wagner in the work. But what I didn’t realize—until Robin started telling me about it, and then I subsequently did the research for this post—what just how much of an influence Wagner had on so much of Joyce’s writing.

It seems to me that the primary debt Joyce—as well as any modern author—owes to Wagner is for the concept of interior monologue, and its immediate descendant, stream-of-consciousness.

In his long essay Opera and Drama, Wagner wrote that the operatic orchestra, “as pure organ of the Feeling...speaks out the very thing which Word-speech in itself can not speak out...that which, looked at from the standpoint of our human intellect, is the Unspeakable.”1

This duality of voice/orchestra was discussed in Robin’s earlier post, “Musical Effects, part 2: Mind-meld,” where she notes that characteristic of Wagner’s music are long stretches of monologues in which the character sings about the dramatic situation at hand, while the orchestra is playing the depth of emotions that the person is feeling. In other words, he uses the singers to voice the conscious thoughts of the character, and the orchestra to voice the unconscious. Moreover, the orchestra can—and usually does—show multiple feelings simultaneously. For instance, a theme associated with friendship, forgiveness, love will be played by the violins, while the bass and horns are playing a theme showing anger.

Here’s an example Robin provided in a letter to a friend:

In Tristan and Isolde, King Marke enters into the opera when he discovers the lovers in flagrante delicto. Isolde was his betrothed; Tristan was like a son to him. This is all we know about Marke when he first comes on stage. He then has a ten-minute soliloquy in which he expresses his shock and confusion about this turn of events. Underneath the singing, the orchestra shows us his feelings as they happen [my emphasis]: sad, reflective, incredulous, shocked, anguished, confused, loving, hurt, angry, unforgiving, conflicted, desolate, heartbroken, compassionate, concerned, kind, and forgiving. We have just met this man, but after this soliloquy we feel we really know him—can really take the measure of him. For me, I learn more about Marke in these ten minutes than I have ever learned about any Puccini character in a full opera.

It’s not surprising that this idea of “infinite” or “continuous melody” (the term coined by Wagner) appealed to writers of fiction, and in 1888, Édouard Dujardin, poet, novelist, and disciple of Symbolist Stéphane Mallarmé, wrote Les Lauriers sont coupés (the laurels were cut down), a novel consisting of one uninterrupted soliloquy. (Go here for a translation of its first paragraph.) 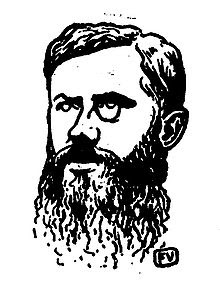 Dujardin, described as “a dandy given to wearing Lohengrin’s swan as an insignia on his vests,” gave full credit to Wagner for the inspiration for his book:

I am going to reveal a secret: Les Lauriers sont coupés was undertaken with the crazy ambition to transpose into the literary domain Wagnerian methods that I defined to myself as follows: the life of the soul represented by the ceaseless urging of musical motifs that express, one after another, indefinitely and successively, “states” of thought, sentiment or sensation; which [ambition] realized itself, in the indefinite succession of short phrases, each rendering one of these states of thought, without logical order, in the manner of surges rising from the depths of self—one would say nowadays from the unconscious or subconscious.”2

Valery Larbaud, borrowing from Paul Bourget’s Cosmopolis (1893), gave the name “monologue intérieur” to the method employed by Dujardin in Les Lauriers. (This method soon morphed into what is now known as stream-of-consciousness. For a simple explanation of the difference between the two, see here.)

James Joyce (see, I finally did get back to him) bought a copy of Les Lauriers sont coupés at a Paris railway kiosk in 1903, and was much taken by the style of interior monologue, in which (Joyce explained) “the reader finds himself established, from the first lines, in the thought of the principal personage, and the uninterrupted unrolling of that thought, replacing the usual form of narrative, conveys to us what this personage is doing or what is happening to him.”3

After the publication of Ulysses, Joyce was always careful to credit Dujardin’s book as inspiration for the style in which it was written.4

And of course, as we have seen, Dujardin got the idea from Wagner.

Wagner as Inspiration for Joyce the Artist

Though careful to recognize Dujardin as the source of his use of interior monologue/stream-of-consciousness, Joyce was more loathe to give credit to Wagner as an inspiration for his works. As noted by Timothy Martin in his in-depth study, Joyce and Wagner, “[t]he Joyce of letters and conversation emerges as an artist whose imagination was conditioned by medieval churchfathers like Thomas Aquinas, classical figures like Homer and Aristotle, obscure philosophers like Vico and Bruno, and insufficiently appreciated modernists like Dujardin.”5

But when it came to the most popular artist of his day (Wagnermania, from around 1890 until the start of the First World War, was on the scale of the crazes associated with the young Sinatra and the Beatles), Joyce feigned distaste: He had no stomach for the adulation of Wagner, calling Die Meistersinger  “pretentious stuff6,” telling a friend that “Wagner puzza di sesso”7 (he “stinks of sex”—now there’s an example of the pot calling the kettle black), and asserting that the musical effects of his own “Sirens” episode in Ulysses were better than Die Walküre.8

[i]t is certain...that Joyce empathized with a man whose career paralleled his so closely. Like Wagner, Joyce set out for Paris in his youth on the slimmest of prospects, in part, at least, to establish himself as an artist; like Wagner, he met indifference and grinding poverty. Both artists would spend much of their lives in exile from their homelands, supported by loyal women whose endurance would be put to the most severe of tests. During his residence in Zurich Joyce must have been aware of the mark Wagner had left on that city during his own exile two generations before.... Joyce must have read passages [from Wagner’s letters] like the following with a good deal of empathy: “With my whole nature, both as man and artist, in absolute opposition to my work and my position, the only hope of deliverance was in a complete severance of my bonds.” The sentiments, if not the diction, of a man beginning thirteen years’ exile from his native Saxony would be worthy of chapter 5 of A Portrait.9

In his later works Joyce fully embraced Wagner’s concept of “Gesamtkunstwerk” (total work of art).  Just one look at the “schema” Joyce provided to his friend Stuart Gilbert to help him understand Ulysses—with its assignation of color, organ, symbol, art, and technic for each scene in the novel—shows the author’s intent for “totality” in the book. 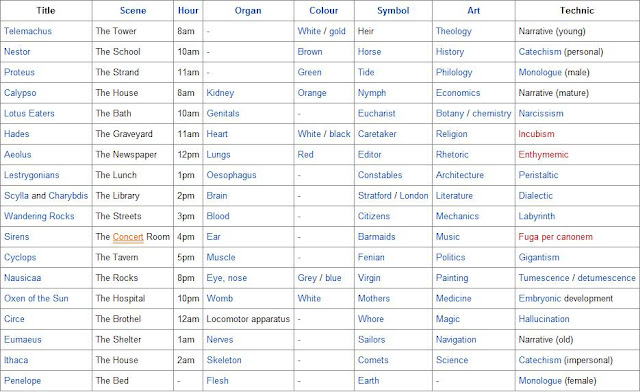 As for Finnegans Wake, well, I can tell you first hand that with its myriad languages, portmanteau words, and references to bodies of water, religions, cultures, history, pop culture, and everything else under the sun, it has got to be the most encyclopedic work ever written. (For an accessible astute description of the Wake, go here.) 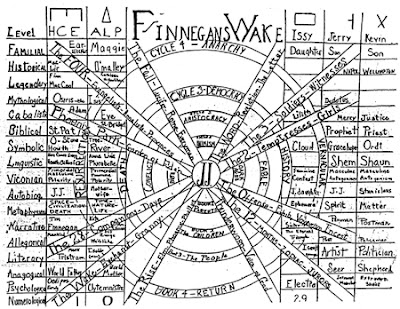 As opined by Timothy Martin, “[t]ogether Ulysses, a book of the waking hours, and Finnegans Wake, the book of the night, comprise all experience.”10  Hard to get more Gesamtkunstwerk than that.

Joyce’s Use of Wagner’s Musical Style

It’s well-known that James Joyce was a talented musician, who played piano and guitar and possessed a fine tenor voice. At one time, he even considered a career as professional singer.11  For purposes of this blog, it’s interesting to note that in 1909 Joyce performed in a Trieste concert of the famous quintet from Die Meistersinger. 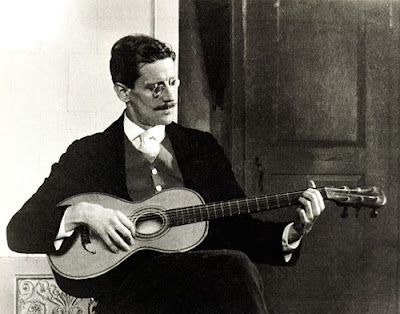 So it’s not surprising how many musical references and allusions appear in his works. But Joyce was also attempting to make his writing itself musical. The tonal and rhythmic quality of his text, for instance—the sound of the spoken words—is easily as important as their sense, especially so in Finnegans Wake. And the multiple meanings of his language—e.g., “O, foetal sleep” [the Wake, at 563.10], which is both “O fatal slip” and a reference to pre-natal innocence—endows his works with a “polyphonic” or “chordal” feeling, such that “the ‘hearer’ of Joyce’s prose must ‘listen vertically as well as horizontally.’”12

The “Sirens” episode of Ulysses integrates musical form itself. For example, the first 63 lines—which seem completely random at first reading—are actually phrases which appear later in the chapter, and thus act as a sort of “overture,” letting the reader get to know the coming “tunes” in advance.

But that’s not all: As reported by Joyce:

I finished the Sirens chapter during the last few days. A big job. I wrote this chapter with the technical resources of music. It is a fugue with all musical notations: piano, forte, rallentando, and so on. A quintet occurs in it, to, as in Die Meistersinger, my favorite Wagnerian opera.13

In addition to the quintet idea, Joyce also borrowed heavily from Wagner in his use of leitmotifs in his books. As noted by Timothy Martin, Ulysses contains

[r]ecurring literary and musical allusions (to Hamlet, Don Giovanni, the Odyssey); reappearing characters (Paddy Dignam, the blind piano tuner, the man in the macintosh); phrases that become attached to particular characters (“bronze by gold” the the barmaids, “jingle” to Boylan); and major themes (parallax, the search for the father, metempsychosis): all have been likened to leitmotifs.14

In Finnegans Wake, Joyce expands on the use of the leitmotif, employing many hundreds of them, which he then repeats with multiple variations. This modification of the motifs in the Wake, Timothy Martin observes,

represents an even closer analogy to Wagnerian technique than does his practice in Ulysses, since Wagner’s motifs are themselves generally altered in key or orchestrated differently when they reappear. In the Wake the leitmotif provides structure on the stylistic level that perfectly complements the mythic theme. “Structure” and “motif” come together in the literary leitmotifs of Finnegans Wake.... In the Wake the leitmotif has almost become an end in itself. We might say that whereas Ulysses borrows from music, Finnegans Wake aspires to be music.15

Next week I will address Wagnerian themes and references in Joyce’s works.