Below is a picture capturing the moment Phil Mickelson–after a decade of trying–finally broke through and won a major at the 2004 Master's tournament. 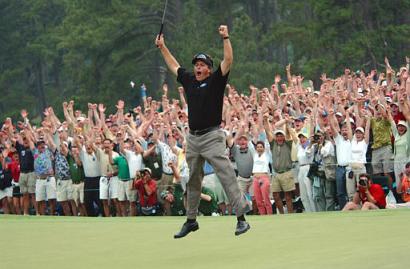 I love this picture as it clearly captures not only the ecstasy Phil felt, but also that of the entire crowd. They were feeling exactly what Phil was feeling at that moment in time—magnificent relief and pure unadulterated joy. It was such a wonderful moment. I'm not even a fan, but I did at home exactly what everyone else did at the tournament—which was to throw up my arms and yell “yes!”—because he had been denied this victory for such a long time.

His moniker, until this defining moment, was “the best golfer to never win a major.”  I am quite sure that everyone in Boston did the exact same thing when the Red Sox finally broke the curse—also in 2004—and won the World Series after 86 years.


The euphoric payoff is certainly one of the big reasons, if not the key reason, people love to watch sports. The payoff is particularly sweet coming after a long streak of denial, after agony. If Phil had won a major much earlier in his career, he might have looked the same in the photo, but the audience wouldn't have. There would have been disappointed fans of Ernie Els, for instance, whom he defeated by a stroke. Some might have shrugged, or clapped politely, but not everyone would have been united in joy as they were here.

So what does this have to do with Wagner? As I described in my last post, Wagner has a unique ability to create an empathetic connection to his characters. While true of agonized grief (like in my King Marke example last post) and a myriad of other emotions, it is particularly true of ecstasy. He is a master at developing the feeling of bliss. In my initial chapter on Wagner's musical effects, I quoted various people saying they felt “uplifted,” “besotted” and “enraptured” by listening to his music. This effect is the reason; when a character feels euphoria, we Wagnerians do also. While we politely stay in our seats during Wagner's many rapturous moments, in our heads we are throwing up our hands up and soaring into the heavens. This is the crack that makes people come back repeatedly to Wagner.

I will give excerpts, but I must warn you that without the build-up, the release doesn't really work the same, anymore than Mickelson's putt in the 2004 Master's would have worked to create the crowd euphoria without build up of frustration. True ecstasy needs agony or it just doesn't have that feeling of divine relief and release.

Wagner had a masterful ability to slowly build a drama, sustaining and intensifying suspense, towards a rapturous climax, or multiple climaxes, as is evident in Tristan and Isolde—the supreme example of this being the finale of the opera, “The Liebestod.”  (Here with Birget Nillson.) This ability to build towards an ecstatic release is striking in all of his mature works.

I don't want to imply that the build-up to the climax is somehow simply in service to this effect, and not extraordinary itself. For instance, at the beginning of Die Walkure, Siegmund meets Sieglinde and they fall in love. A universal story, but the manner in which is is done is “a masterpiece of rhapsodic melody joined to a tight plan of steadily rising tension released in successive climaxes as the two are drawn to each other and reveal their pasts.” (Quoted from here.) Exactly so. The journey to the moment of them proclaiming their love is enthralling in and of itself, the various peaks just making it more so. Here is Sieglinde (sung by Jessye Norman) declaring her love for Siegmund, which comes about an hour after the gorgeous orchestral music has already made us feel what is in her heart.

Of course, one of the reasons he was successful in creating his emotional effects is that he had the ability to write melodies perfect for the emotional moment, and that is particularly true of euphoria. As an example, listen to this music from Die Walküre that begins at 1:25. Build-up or no, it always sends ripples of elation through me. (The subtitles are in German so, without recapitulating too much of the story, the gist is that Brünnhilde, who has just saved Sieglinde from the wrath of Woton, is telling her that she is pregnant with the destined-for-heroic Siegfried. Sieglinde responds by singing of her tremendous veneration of and gratitude to Brünnhilde. This clip is with Hildegard Behrens and Jessye Norman.)

Wagnerians have been trying for over 150 years to explain the whys and the hows, as well as the mere fact of the incredible feelings one can get from listening to Wagner's music. This and the two posts before were my stab at it, and quite inadequate I am sure. Truly, it is ineffable.  But let me summarize by quoting my favorite Wagner author, Bryan Magee, from his outstanding book, The Tristan Chord:

Music of this greatness is a directly felt experience as profound as any that it is possible for us to have.

That's it in a nutshell.

I can guess what some may be thinking at this point: If Wagner is so damn good, how come his reputation is that his music is loud, long and boring? That's the subject of the next post.

I always have things to say that are off-point. So I am going to add this section to my posts to round those up.